SLHTA Launches Its Apprenticeship and Skills Training for Employment Initiative 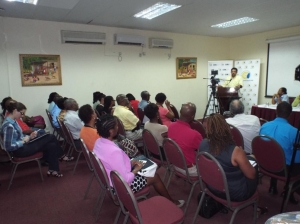 General Managers, and Human Resource Managers of hotels, Head of Training Institutions including SALCC, Ministry of Education, Ministry of Finance, NSDC, CARE, gathered at the Bay Gardens Hotel on Wednesday 10th December 2014 for the launch of the SLHTA Apprenticeship and Skills Training for Employment Initiative.

This initiative is seeking to expose 1600 young people to training and employment opportunities in the hotel and tourism industry.

The programme will be jointly funded by the Saint Lucia Hotel and Tourism Association and the Ministry of Finance. The SLHTA will utilize funds from the Tourism Enhancement Fund (TEF) which was established in October 2013.

Chairman of the Board of Trustees for the Tourism Enhancement Fund, Mr. Sanovnik Destang gave an overview of the programme. He was particularly happy that this initiative was coming at a time when St Lucia hospitality industry was scoring a number of first places on the global scene, and the competition to remain at the top of the ratings was demanding on all sectors of the economy.

Mr Donovan Williams, Permanent Secretary in the Ministry of Tourism, Heritage and Creative Industries who is also the Deputy Chair of the Board of Trustees spoke of the unlimited possibilities which such a venture can create in the area of human resource particularly for young people.

The Executive Vice President of the SLHTA, Mr. Noorani Azeez emphasized that this is a private sector initiative and is not restricted only to the hotel sector but that businesses must wholeheartedly embrace the opportunity. He outlined the manner in which the programme will be rolled out, and pointed out that although the industry has made great strides, this in no way should cause us to become complacent but we should strive to raise the bar, which is what is hoped this initiative will provide.