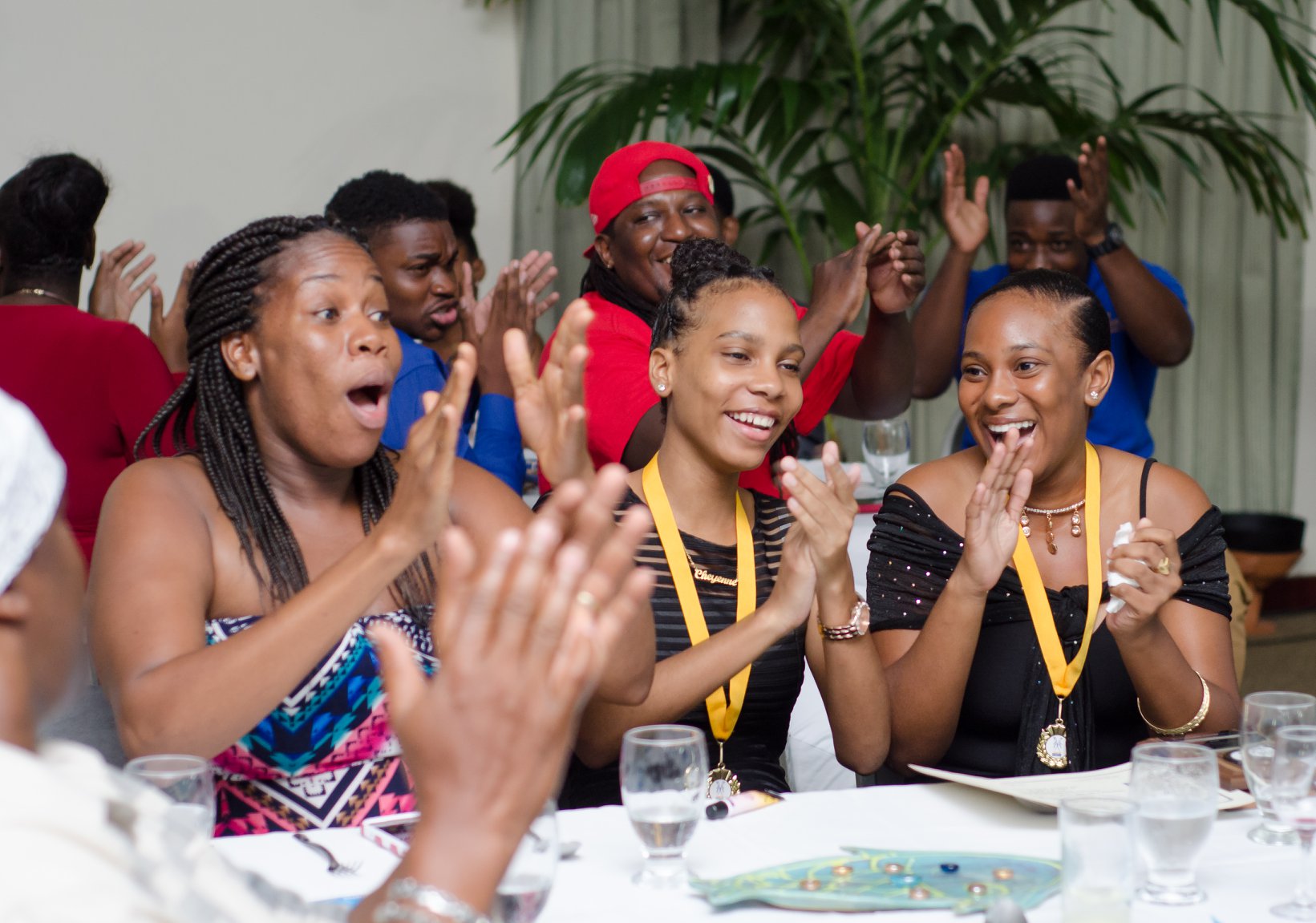 Two young St. Lucians have won the 2018 Caribbean Junior Duelling Challenge, one of the Caribbean’s biggest and most prestigious culinary competitions.

Karina Abraham and Cheyenne Hippolyte, students of the Soufriere Comprehensive Secondary School represented St. Lucia in the competition and delivered a spectacular performance that ultimately won the hearts of the judges and earned them high praise from the audience and other participants in the event.

Prior to their victory in Barbados, Karina and Cheyenne had been crowned champions in the final leg of the 2018 Chefs in Schools Competition sponsored by the SLHTA’s Tourism Enhancement Fund, which was held June 15 at the Ciceron Secondary School. This qualified them to represent their country at the Caribbean Junior Duelling Challenge which was held August 14 – 19 at the Culinary Arena, Newton Industrial Estate Christ Church, Barbados.

The competition was the highlight of the Caribbean Junior Culinary Conference (CJCC), a seven-day event which also featured workshops and presentations on culinary techniques by respected industry professionals. Junior teams from seven Caribbean islands participated in this year’s competition, including the Cayman Islands, Trinidad & Tobago, Dominica, Grenada, St. Croix, Barbados and St. Lucia.

St. Lucia’s dynamic duo came away with the Caribbean Junior Duelling Challenge trophy, thereby making them the overall winners of the competition. They also captured gold medals in the first two rounds, which required the teams to cook and present a national dish in the first round and a dish from a mystery basket in the second round.

After the first two rounds, three teams went on to compete in the finals, which included cooking a dish from another mystery basket. All dishes were judged on technical skills, presentation, taste and texture, cooking techniques and innovation.

The St. Lucian team’s winning dish in the final round was macaroni and corned beef wrapped in blanched cabbage leaf with fried potato, mango, carrot and corned puree, coupled with stewed chicken wings coated in chocolate biscuit and deep fried, plus grilled shrimp and pan-roasted pork with a drizzle of spicy sauce. The two victors were accompanied by their culinary arts teacher, Nashanka Henry and the SLHTA’s Tourism Enhancement Fund Projects Coordinator, Wendel George during their stay in Barbados.

On their return to St. Lucia on Monday (August 20) Karina and Cheyenne received a heroine’s welcome from the St. Lucia Hotel & Tourism Association. The SLHTA hosted a reception in their honour at the Bay Gardens Beach Resort where they were showered with accolades and commendations by representatives of the association and other industry stakeholders.

The reception turned out to be a joyous occasion for the two young culinary stars who both expressed their delight at winning the Junior Duelling Challenge, and the pride they felt at being able to represent St Lucia at the competition. They said they gave it their all and feel very satisfied with their performance and the results. 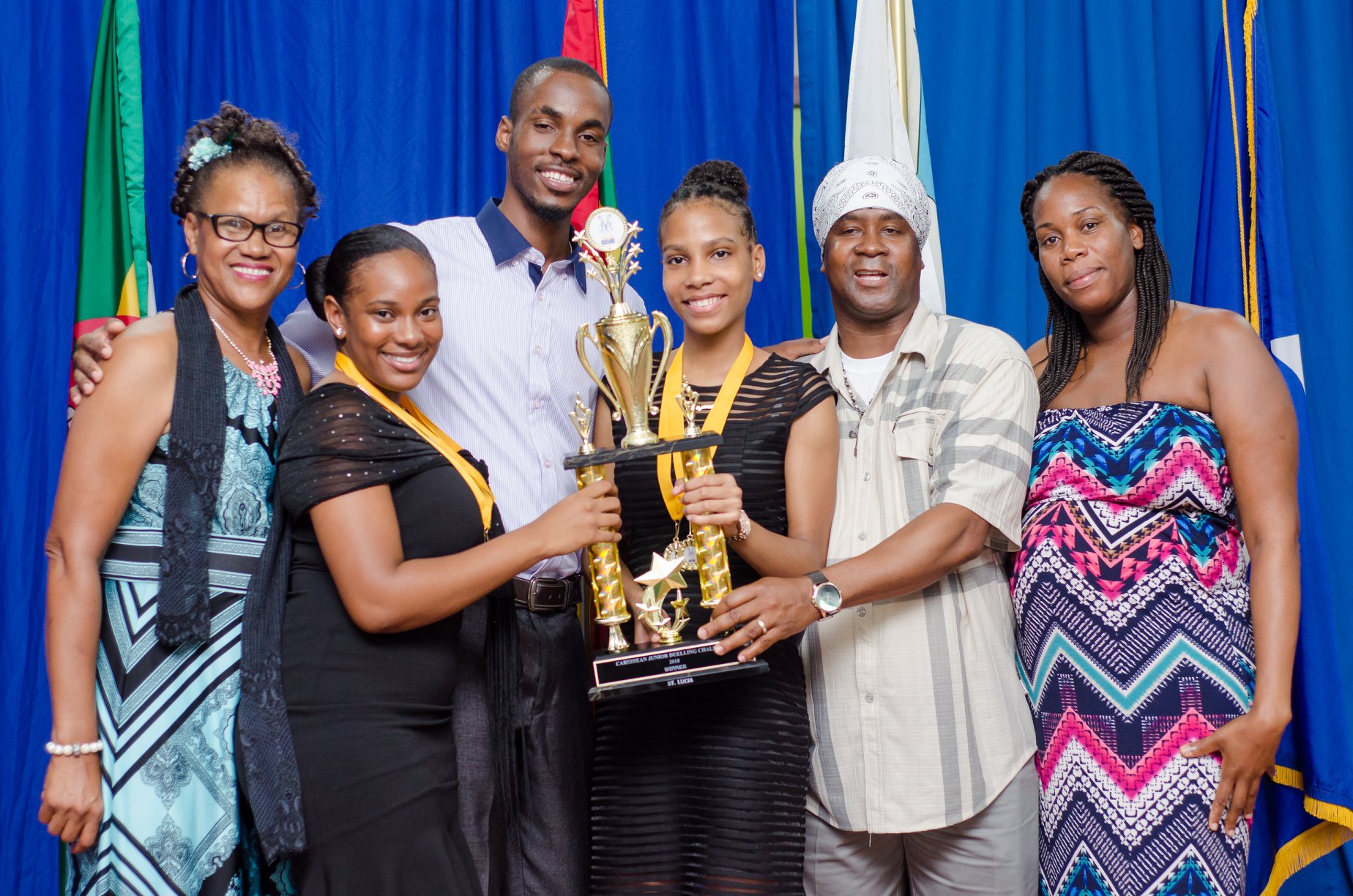 “The competition was very exciting and challenging but we overcame the pressure and we brought the gold home. We’re very proud,” said Karina. “We performed exceptionally well and we were consistent. We set standards for ourselves and we were able to rise to those standards in every round of the competition,” she added.

Tourism Enhancement Fund Projects Coordinator, Wendel George praised the two young chefs for their winning performance, and also lauded Anse Chastanet’s chef de cuisine, Frank Faucher  who served as their coach during the preparatory stages of both the SLHTA Chefs in Schools Completion and the Caribbean Junior Duelling Challenge.

“The team put on a really good fight and I was extremely impressed with the way they were able to compose themselves and present their dishes in the way they did, in that they were very consistent,” said Wendel. “As an association we’re very happy with their performance. We’re also delighted that so many companies and association members supported the initiative. Anse Chastanet, for example, has always been supporting the Chefs in Schools program from its inception. They have always provided a chef to coach the students, and they have always performed exceptionally at those events.” he added.

In addition to the St. Lucia team’s glorious win, the SLHTA has been invited to host the Caribbean Junior Duelling Challenge in 2019. Wendel says the association welcomes the opportunity to host the event and believes it will provide tremendous benefits to the local tourism and hospitality industry and St. Lucia as a whole.

“It is going to be very beneficial to the hoteliers, the local vendors and the St. Lucian people in general. We’re going to have teams from seven or eight islands coming to St. Lucia to participate in what has become a major culinary event in the Caribbean. A wide range of businesses, including local food and beverage suppliers, restaurants and shopping malls will benefit as a result of the competition being held in St. Lucia. We believe that this is the time for us to take this amazing competition to another level and really push the culinary arts in St Lucia. Public interest in culinary arts is really picking up, especially among the youths, and people are always looking forward to the competitions. More students are becoming aware of the culinary arts and increasingly they want to take it up academically and participate in the SLHTA Chefs in Schools program. This means that the SLHTA now has an even bigger responsibility to really push that agenda on the heels of all the awards that we’ve already won,” said Wendel.